Sources of Subseasonal Predictability Over CONUS in UFS and Observations

In a new study published in the Journal of Climate, a group of George Mason University (GMU) investigators and UFS developers evaluated one of the first prototypes of the UFS S2S Application. The study is focused on assessing the forecast skill of surface weather over the conterminous United States (CONUS) during boreal summer. Because the origin of sources of extended-range predictability is an active area of research, the first part of the study is focused on finding new sources of predictability on the subseasonal to seasonal (S2S) timescale in observational data. 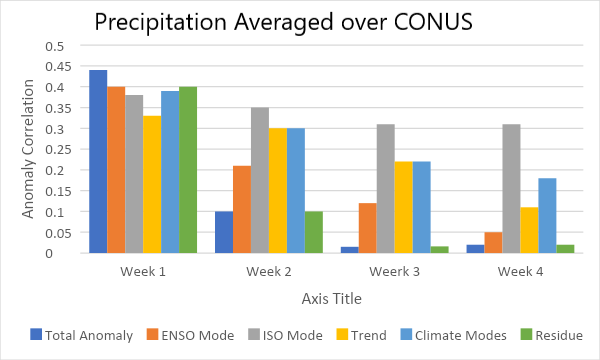 The analysis used to explore the source of predictability is based on a data adaptive method known as the multi-channel singular spectral analysis (MSSA). When applied to observational data, MSSA reveals that in addition to El-Niño Southern Oscillation (ENSO) and long-term climate trends, which have been known to affect the surface weather over CONUS, another mode of climate variability can have an important impact. This mode manifests as an intraseasonal oscillation (ISO) with a period of about 50 days. The ISO has a strong signature in the lower troposphere large-scale circulation over 180°-15°W in the latitudinal band between 20°S – 41°N, and projects well onto the surface air temperature and precipitation.

The evaluation of 7 years of reforecasts produced by UFS Prototype 2 shows an overall good agreement between the climate modes simulated by the model and their observed counterparts. Some regional disagreements between the model and reforecasts still exist and they show at all lags from Week 1 through 4, but this kind of analysis offers some guidance on where the model development needs to be directed.

The forecast skill of the climate modes signal in precipitation over CONUS shows that beyond Week 2 the ISO mode is the leading source of predictability. While the anomaly correlation based on the daily anomaly is almost zero, the correlation for the ISO mode is slightly higher than 0.3. This result is a strong indication that more work needs to be done to unveil all sources of predictability hidden in the ‘mist’ of chaos and to adequately represent these sources in the forecast models.