On July 21, 2021 the National Weather Service began operations on a new and groundbreaking space weather model known as the Whole Atmosphere Model and Ionosphere Plasmasphere Electrodynamics Model (WAM-IPE). The new model operations allow the Space Weather Prediction Center (SWPC) to provide better forecasting capabilities of ionospheric and space weather conditions. The model utilizes couplings with the neutral atmosphere, and the ionosphere and plasmasphere. Henry Jaung, a recently retired research scientist from NCEP, who has spent much time working on the project says: “It took more than 10 years from research to operation (R2O).” Jaung continues, “It started from model development of WAM (Whole Atmosphere Model) in EMC and IPE (ionosphere-plasmasphere-Electrodynamics) in SWPC and CIRES [Cooperative Institute for Research in Environmental Sciences].”

As the name suggests, the WAM and IPE are two separate parts of the same model. The WAM is an extension of the Global Forecasting System’s (GFS) Global Spectral Model(GSM). The GSM did not include the thermosphere or represent its constituents. Because of this, Jaung says he and his team augmented the GFS’s global spectral model with “atmospheric constituents of O, O2, O3, and N2, then extended original GSM vertical domain from below 100km to up to 500-600 km to cover thermosphere, and implemented thermosphere-related model physics, as a whole atmosphere model (WAM).”

The IPE is a time-dependent, 3-dimensional model of the ionosphere and plasmasphere. These systems are coupled together, which allow the model to forecast the impact the neutral atmosphere (wind, temperature, chemistry, etc…) has on the ionosphere and plasmasphere. Key features of the IPE include accurate magnetic field lines (flux tubes). The coupling is done through a special space weather mediator, which allows information to be exported between WAM and IPE.

The coupling of these two systems into one model was one of much research and time. Henry Jaung said the main challenge of creating the combined model was finding a way to couple the WAM and IPE so that they can interact with each other. Jaung explains that a 3 Dimensional model must have a vertical domain up to the thermosphere in order to cover most of the neutral atmosphere, which Jaung says: “connect and cover the lower model domain of IPE for coupling [the WAM and IPE]”. 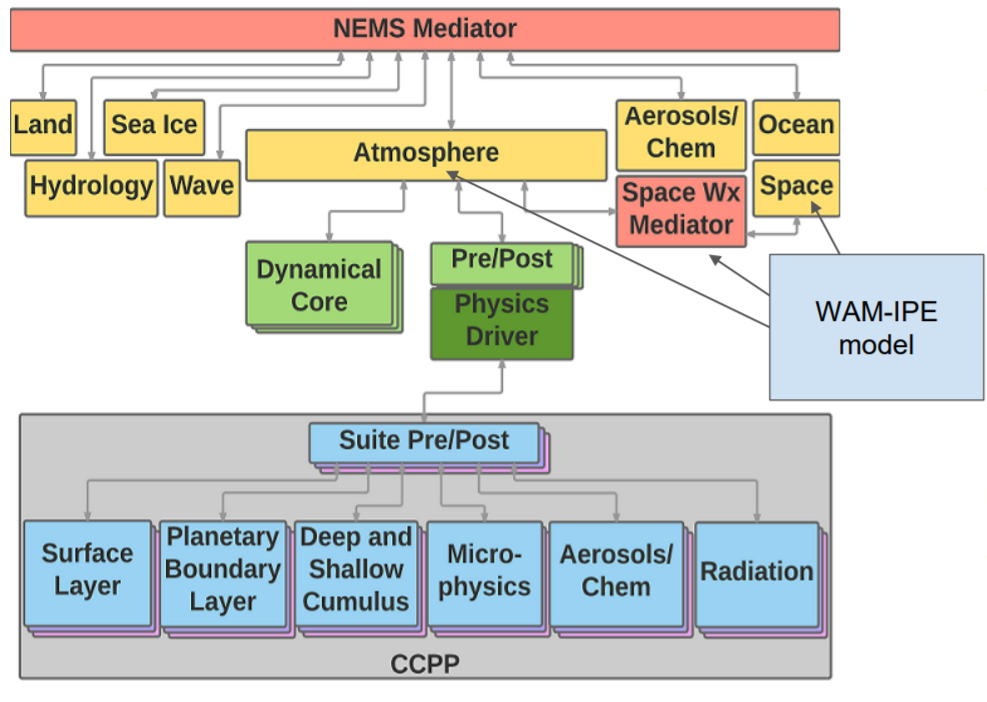 The WAM-IPE, alongside existing models, allows the SWPC to have greater capabilities to forecast through its introduction of new products that can vastly improve warning times and accuracy. The first ionospheric product provided by the WAM-IPE is the total electron content (TEC). The TEC is the number of electrons in a one-meter squared area, that is between two heights in the atmosphere. The next ionospheric product is the maximum usable frequency (MUF), which is the maximum electromagnetic frequency that can be used for communication by bouncing the EM waves off the ionosphere.
The WAM-IPE also ships with products that describe the neutral atmosphere. The first is the density of the atmosphere at 400km, and the second is the anomaly of the density at 400km. The last product is the elemental oxygen to nitrogen ratio which helps the SWPC forecast using atmospheric chemistry. All neutral atmospheric and ionospheric products are valid for 48 hours.

These new products and features are breakthroughs in space weather modeling and computing, as this is the first NCEP operational model ever to forecast upper atmospheric conditions both influenced by space, and by the lower atmospheric conditions and perturbations. The products described allow for better advising and forecasting for private sector communications and aviation that has not previously been done. The 400km density will allow for the most precise orbit prediction ever for space traffic, as orbital decay effects from atmospheric drag can be modeled much more accurately.

All of these innovations come with the cost of computing and large amounts of data. Jaung explains: “We spent lots of time developing the WAM data assimilation and 3D coupling process between WAM and IPE, and lots of time in tuning the model results to be satisfied among us.” In the official NOAA press release, it is explained that more satellite observations and data collection will contribute to the model’s continued success. All of this is possible because of modern high=performance computing.

The WAM-IPE is a breakthrough model that will allow for better forecasting and warning in space weather. Because of researchers like Henry Jaung, we now have the capability to create a more space weather-ready nation, one that is powered by research and community.

The Space Weather Application is part of the Unified Forecast System. Current plans call for the development of a non-hydrostatic, FV3-WAM (using the finite volume dynamical core (FV3)) at a 50 km resolution. The FV3-WAM development will proceed in parallel with enhancement in the IPE component, including increased resolution, transport scheme, and parallel-processing grid decomposition. The model improvement will enable the development of ionospheric irregularity space weather products utilizing the enhanced resolution and wave spectrum of FV3-WAM.